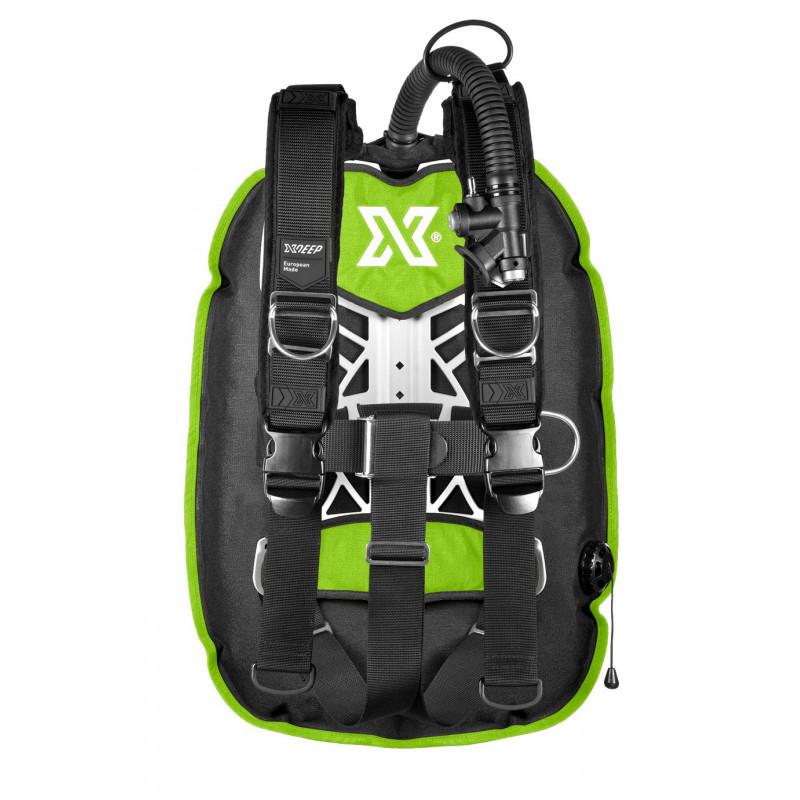 Meet Ghost - innovative, lightest backplate-wing single cylinder BC system on the planet.
Comfortable and complete at only 5.5 lbs of weight.

Revolutionary design and cutting edge materials, coupled with no compromises on quality has created a tough and durable BCD unrivaled in recreational diving.
Ghost BC was designed to be very streamlined, to stay tight to divers body and cylinder. Extremely low drag reduces the effort needed to move through the water. Less effort the better our gas consumption and more time we get on our underwater adventure.

Ghost BCD is a backlapte-wing based recreational BCD as its inspired by technical divers, wing will hold you horizontal in the water, achieving that awesome and effortless trim position that enhances safety, improves gas consumption and team awareness. Oh, and looks cool too !

Ghost BC (aka wing) underwent great improvements from any standard BC wing, wing is intentionally smaller than other single cylinder wings to prevent you being pushed forward on the surface and instead maximizes it’s small size but significant lift of over 37 lbs / 17 kgs of buoyancy. This design ensures that just about all the BCD lift is kept underwater when you are upright at the surface granting diver high surface position needed especially in high waves conditions.

Overcoming the donning and doffing challenges that standard backplate and harness systems present, whilst maintaining the great fit these systems provide was a satisfying challenge to overcome.

Ghost BCD uniquely designed harness allows for easy ON - easy OFF.
Weight management and distribution is extremely easy with lots of weight pockets to choose from that installs in seconds.

Accept no less on your recreational scuba dives. We made GHOST’s geometry our obsession for over 2 years to make diving it easy, effortless and best diving experience possible. Your first dive in Ghost BCD will leave you speechless and inspire your every next dive.

Please, login to leave a review

13 other products in the same category:

Can XDEEP GHOST BCD be used with doubles ?

Unfortunately no, GHOST backplate is made with travel in mind means its construction allows it to be very lightweight and compact. XDEEP Ghost backplate is still very durable and sturdy but not heavy duty enough to be capable of supporting heavy doubles. Good news is that large wing capacity 37 lbs / 17 kgs of lift will support more than one primary cylinder on your back. With peace of mind you can use one or more stage or deco bottles when diving XDEEP NX GHOST.

What's the difference between XDEEP GHOST and ZEN scuba BCD ?

Although ZEN and GHOST looks similarly they are very different in purpose. Lets take a closer look at the differences below.

XDEEP NX ZEN - same skeleton look but ZEN backplate is significantly larger than GHOST backplate, also since travel weight is not a main concern conventional heavier materials were used for backplate like aluminum and stainless steel. Unlike NX GHOST backplate that won't support double tanks NX ZEN backplate can be used with doubles when using in combination with double cylinders BC wing i.e. NX PROJECT

- split crotch strap, game changer, largely improves stability, comfort plus adds on additional butt d-ring placing them more on the outside of a divers body frame making them much more accessible vs. one centered crotch strap d-ring

- shoulder webbing straps run lower into the backplate leaving diver larger armhole, putting BCD on and off is much easier

Both XDEEP NX GHOST and ZEN trims nicely and with ease. Both are very stable and extremely comfortable plus by lift capacity capable BCD's. Choice comes down to where most of your dives will be done, if mostly travel go with NX GHOST, if mostly locally where more weight and durability is required go with NX ZEN. Bottom line you cant go wrong with either one.

Get to know your BCD.