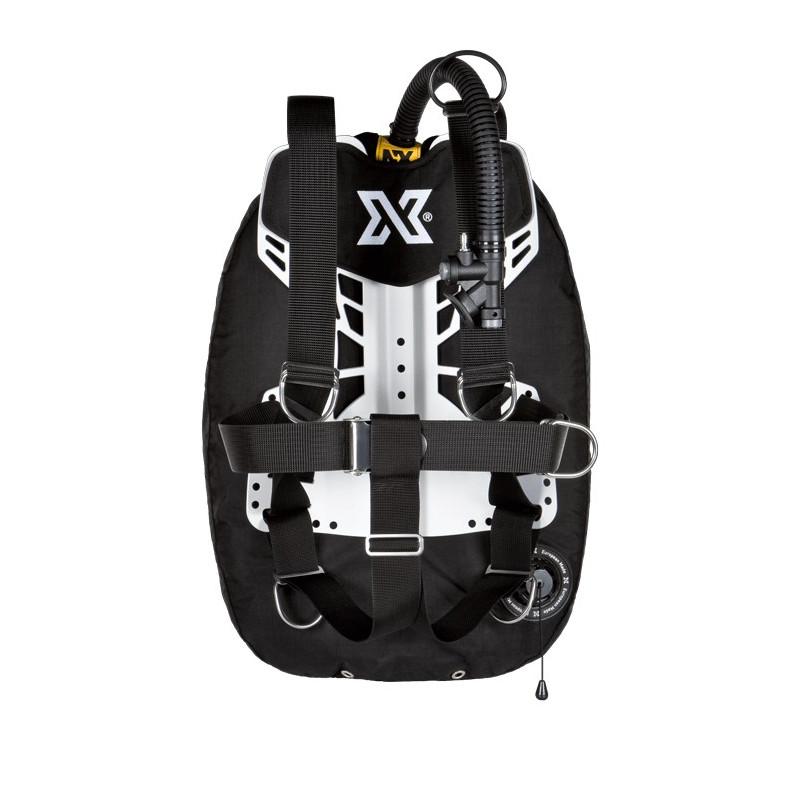 NX ZEN Standard
Inspired by a love of diving, engineered for maximum performance !
We may dive for different reasons, but whatever inspires us to go underwater, our gear must add to the enjoyment. NX ZEN is the next generation scuba diving BCD that implements meticulous design, advanced materials and expertise of world renowned divers to make you feel as one with the aquatic world.

A STEP CHANGE IN BCD APPLICATION
Jump on any dive boat in the last 20 years and every BCD you see will be a slight variation on a theme. The NX ZEN is the result of our passion to break from that tradition and chase for improvement, from what works into what performs at a previously unheard level.
NX ZEN is stable, comfortable and ergonomic BCD.

ZEN BC wing is deliberately narrow so that it does not protrude from the side of your tank. Enhances your buoyancy control and significantly reduces drag. Reduced drag improves our gas consumption, enabling longer and safer dives.
Inflator positioned in the center of BC allows added gas to be immediately distributed equally down both sides of the wing, leaving you in perfect trim.

FINALLY - AN ERGONOMIC BACKPLATE
The classic back plates design history dates back to what could be cut out of an old road sign. For the first time since then we have looked properly at the ergonomics and anatomy of the back. The redesign has created a plate that is better in every respect.
Enlarging the upper part of the back plate has achieved better weight distribution during the dive and removes load from the lumbar region. The lower plate design, spreads the load comfortably safely allowing for the optimal attachment of weight pockets and accessories.
The new NX Series back plate is comfortable, stable and protective of your back.

Last but important improvement, V-shaped crotch strap
The NX Series harness is equipped with totally new V shaped crotch strap.
The V shape is more comfortable, eliminating the single strap design running directly between the legs. Whether walking with your gear to jump in or scootering around a reef, you will feel the very direct benefit.

Please, login to leave a review

14 other products in the same category:

What's the difference between XDEEP GHOST and ZEN scuba BCD ?

Although ZEN and GHOST looks similarly they are very different in purpose. Lets take a closer look at the differences below.

XDEEP NX ZEN - same skeleton look but ZEN backplate is significantly larger than GHOST backplate, also since travel weight is not a main concern conventional heavier materials were used for backplate like aluminum and stainless steel. Unlike NX GHOST backplate that won't support double tanks NX ZEN backplate can be used with doubles when using in combination with double cylinders BC wing i.e. NX PROJECT

- split crotch strap, game changer, largely improves stability, comfort plus adds on additional butt d-ring placing them more on the outside of a divers body frame making them much more accessible vs. one centered crotch strap d-ring

- shoulder webbing straps run lower into the backplate leaving diver larger armhole, putting BCD on and off is much easier

Both XDEEP NX GHOST and ZEN trims nicely and with ease. Both are very stable and extremely comfortable plus by lift capacity capable BCD's. Choice comes down to where most of your dives will be done, if mostly travel go with NX GHOST, if mostly locally where more weight and durability is required go with NX ZEN. Bottom line you cant go wrong with either one.

Get to know your BCD.